You can define variables and use them in multiple interfaces across Continuous Testing Platform. In this section:

The following image example shows variables being added to a variable set associated with a TST file.

You review, add, and modify all variables related to a specific environment from the Manage Instances page in Environment Manager. Refer to Managing Component Instances for details.

You cannot override the variable values used in job. Jobs can use either:

Add the new value in the text field to override a value. 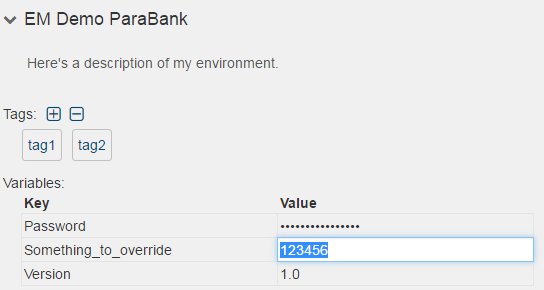 If you later want to remove return to the inherited variable (e.g., remove the override), click in that field, then click the Revert button in the right of that field.

From the Manage Instances Page

To override an inherited variable value from the manage instances page (described in Managing Component Instances):

From the Component Instance Wizard 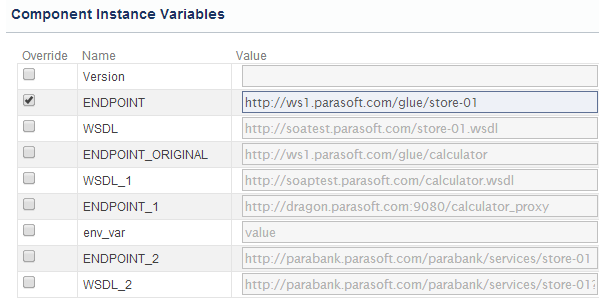 Note that any overrides made at this point will apply only to this specific component instance.

When variable values are editable, you can mask or unmask them (if they were not yet saved).

In system/environment information panels, you can mask a value by clicking in that field, then clicking the Mask icon in the right of the field.

In other areas, you can mask a value by using the key icon to the right of the variable editor.

You can define a set of variables to be referenced within your test scenario or virtual asset. For example, you might want the WSDL, host, and port to point to different values for different test environments. When you specify these settings with variables (rather than hard-coding them in the tests), it is much easier to reuse the same test scenario across multiple environments.

One or more variables are referred to in SOAtest as an "environment" and are not to be confused with an environment as defined in Environment Manager.

To add a variable set to an existing .tst or .pva file:

The variable sets are added to the test or virtual asset tree.

If multiple variables sets are added, a Variables folder will be automatically created to contain them.

To configure variable values, use the controls available in the Variable Set page.

If you want to mask a variable value, click the key icon to the right of the value field.

Open the test scenario or virtual asset page and choose a variable set from the Active variables drop-down menu.

Click on a variable set and enable the Set as active option to mark the set as active.

Configuring the Variables for a Test Job

When you create a test job, you’ll have the option of using the variables from the active variable set or adjusting the values as needed. 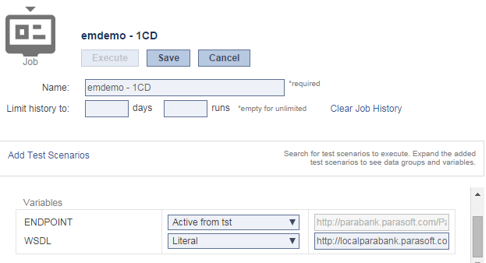