SOAtest’s API Coverage provides visibility into how well your tests cover the related resources and operations. This helps you gauge the effectiveness of your existing test suite and determine where additional tests need to be added.

SOAtest’s reports detail the level of coverage achieved for each applicable resource and operation, as well as the pass/fail status of the tests responsible for that coverage. The reports also pinpoint which .tsts and tests covered each operation (with a pass/fail breakdown at this level as well).

If tests are executed with a Test Configuration whose Execution> API Coverage> Referenced by tests option is enabled, SOAtest compiles a list of coverable resources from the service definitions (OpenAPI/Swagger, RAML, WADL, WSDL) that are configured in constrained SOAP Client or REST Client tools.

If you want SOAtest to calculate coverage for a user-defined list of coverable resources in addition to—or instead of—the automatically-calculated coverable resources, you can specify that list in the Test Configuration’s Execution> API Coverage> Defined here table. 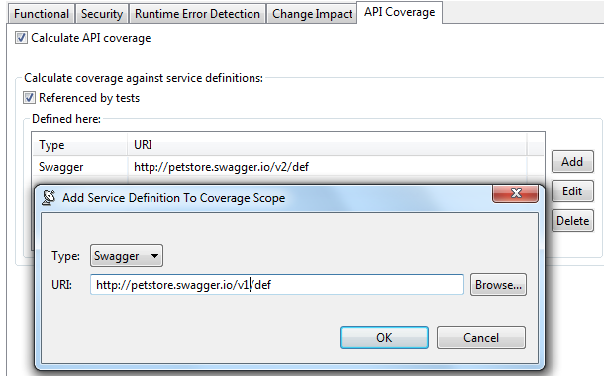 Coverage for any services that do not match any of the known coverable resources is calculated and reported under "Unknown Service." Coverage information is not currently calculated for query parameters, payloads, or response codes.

For example, assume you have a test suite with two test clients:

Also assume that the Test Configuration’s Execution> API Coverage> Referenced by tests option is enabled. SOAtest will recognize the  "Petstore" service definition as a "coverable resource" because it is configured in the constrained REST Client.  Since the REST Client and Messaging Client both touch the Petstore service, SOAtest will report both tools’ coverage under the Petstore resource and operations.

If you add a new Messaging Client that exercises a service other than Petstore (e.g., Grocerystore), this coverage will be reported under “Unknown Service”.

Now, assume that you have a test suite with hundreds of test clients (many of which are constrained to various service definitions), but you want to focus on reviewing coverage related to the API defined at http://machine:8080/api/v2/def. To achieve this, you would disable the Test Configuration’s Execution> API Coverage> Referenced by tests option and set the table as follows: