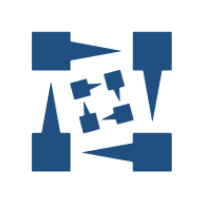 Nodes are selected and chained together to design the flows that define a service that implements a certain policy. To use a node in your flow, drag it into a sheet from the parasoft palette. The node is pre-loaded with useful libraries:

Click on the following link to learn more about the function node: https://nodered.org/docs/writing-functions.

Double-click a node to open the node settings dialog. Different nodes have different editing controls depending on their function. The Info tab shows documentation for the node. Many nodes have required fields. If a required field is not configured, it will be outlined in red. If you attempt to save a node that does not have a value in all of the required fields, a red triangle icon will be displayed above the node.

You can use double curly brackets ({{ }}), referred to as “mustaches,” in function nodes, REST API nodes, and other nodes to mark message variables.

The following snippet is added to your node:

The following message is received:

The payload will result in the following:

Additionally, you can render unescaped HTML in some nodes with triple curly bracket notation. For example, {{{something}}}.

Many nodes contain input and output fields, which are prefixed with "msg.” The prefix indicates that the field is used to configure the property on the “msg” object that should be used as an input or an output (depending on the field's purpose).

For example, one of the most common nodes that contains input and output properties is the DTP REST API node: When the “GET” method is selected, the DTP REST API node provides only a “Response” field. This response field is used to define the property of the “msg” object where the response from the API should be written. Providing a method for defining the output property simplifies managing data from various resources, because you would otherwise need to add additional function nodes to move or restructure the data before additional data can be retrieved.

Missing or unrecognized nodes prevent all of the deployed flows from functioning properly. This might occur if, for example, you install an artifact that depends on an additional artifact that has not been installed. If a deployed slice contains an unknown/unrecognized node, then either:

Restart the service to take effect. New nodes are only registered when the service starts up.

As a best practice, be sure that when you uninstall an artifact from the Artifact Manager, you can also remove any flows that are broken by the removal of the artifact.