Using test projects is recommended in the following situations:

Test projects also provide a better separation of testing components (such as test cases and stubs)  from the original source code.

The user interface provided to create and control test projects consists of the following:

You can select multiple build targets to create a test project, but each selection should contain only one type of build target (Flexible or Standard build support build targets). Mixing build target types is not allowed. 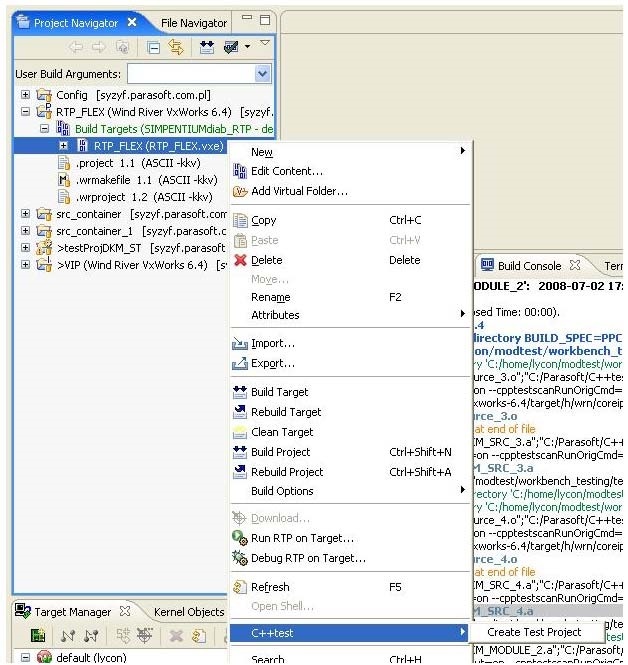 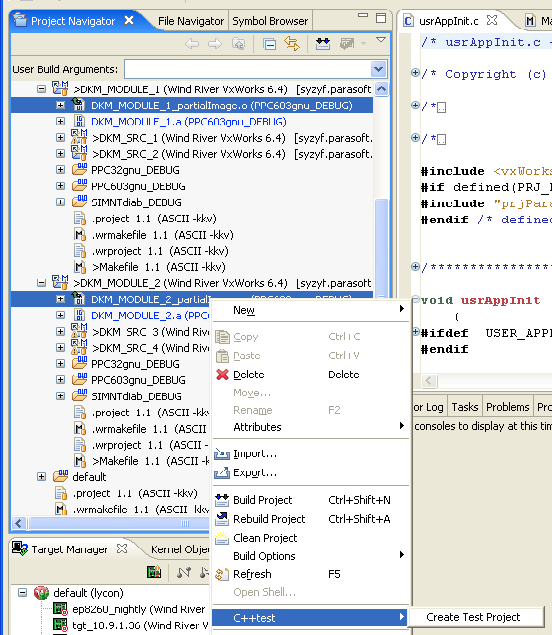 The Create Test Project command starts the C++test wizard for Test Projects creation. This wizard consists of the following pages

To complete this page:

C++test will then try to collect the necessary information from the build, then start the build process for build targets that were selected when you chose the Create Test Project command.

Build commands are prefixed with the C++test utility designed to collect compiler/linker flags and store them in a build data file. For more details this utility, see Creating a Project Using an Existing Build System.

C++test can replace %makeprefix% with an arbitrary parameter. In order to obtain all build options from the Workbench build, C++test needs to execute make with the -B parameter. C++test execution of the Workbench build does not actually entail building binary files, since the compiler is replaced by C++test option scanning utility. In order to be able to attach the -B parameter to the make execution, having the build command as make %makeprefix% is most convenient, and does not cause any other changes in the standard Workbench build.

The information collected during the build process scan is saved inside the test project, in a text file named <test_project_name>.bdf. This file is intended to be used only in the local workspace. It should not be shared through the source control because it uses absolute paths.

C++test tries to link the parent folder of any source file that was included in the build process. Using this panel, you can modify the automatically-generated test project structure via shortcut (right-click) menus. 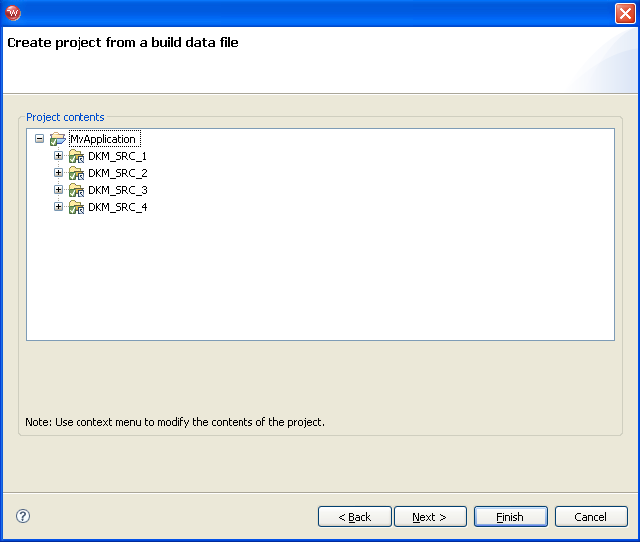 This panel allows you to add a variable to define the linked folders location. This is needed when you intend to share the created test project.

Note that when the project is imported to another workspace, the applied variables need to be defined (through the Window> Preferences> General> Workspace> Linked Resources menu). Usually, the workspace location is referenced using a variable. 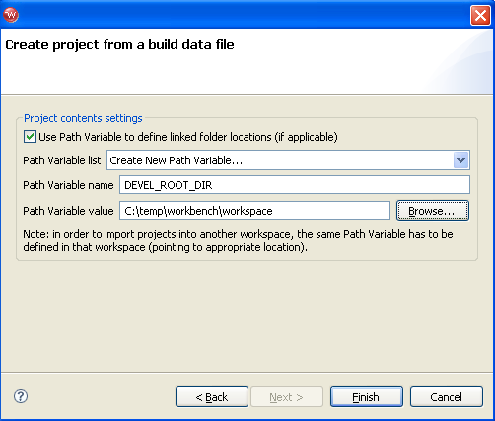 The Refresh Test Project command is available from the right-click (shortcut) menu in the Project Navigator. This command is shown only for test projects nodes. Choosing this command will force the build scanning process to run. 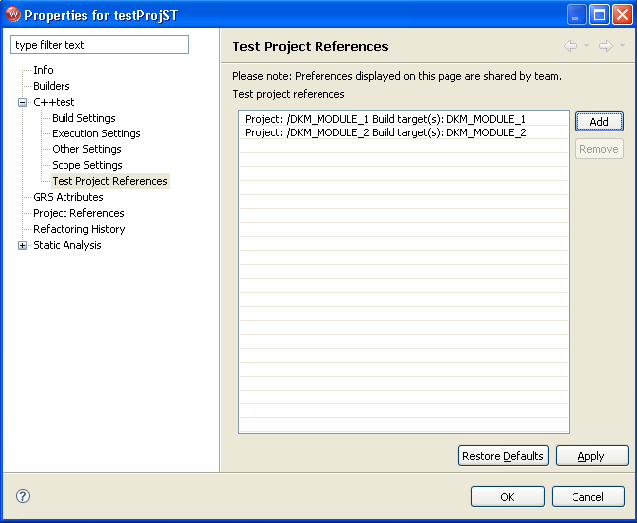 The Property page contains a test project references table view with the list of build targets that are referenced by a test project. When you choose the Refresh Test Project command, C++test will try to collect build flag information for all the resources referenced in this list.

Test project maintenance involves keeping the test project in sync with the original project for which it was created. In most cases, maintenance will require:

When a test project is created, C++test links to it all directories containing source files that were compiled while building the referenced build targets. This is a one-time activity and no additional automatic resource linking is done later, after the project is created. As a result, if you want to link a resource that was added after the original project creation, you need to add that link manually—using the standard Eclipse facilities for adding linked resources (New> File/Folder> Advanced, Link to file/folder in file system).

When a test project is created, C++test links to it all directories containing source files that were compiled while building the referenced build targets. This is a one-time activity and no automatic link updating is done later, after the project is created. As a result, if a resource was removed from the referenced build target after the original project creation, you need to remove that link manually—using the standard Eclipse facilities for removing linked resources

If the test project is created from more then one build target, you  may need to modify the list of referenced build targets by adding or removing a build target from the list. This can be done using a special property page that is accessible from by right-clicking the project’s Navigator node, then choosing Properties> C++test> Test Project References. The changes will take effect the next time the project is refreshed.

It is common practice to work with more than one Wind River Workbench project's build spec for a given project. In such situation, when the active build spec is changed in the original project, you can pick up a new compiler/linker flags by simply refreshing the project. You do not NOT need to create a separate test project for every build spec.