This topic explains how to review coverage information from tests run with C++test. Coverage can be tracked for unit tests and manual or automated tests run at the application level.

Analyzing Coverage in the GUI

To view a summary of coverage information after C++test executes unit test cases:

Coverage statistics for the project and all analyzed files and functions will be displayed in the Coverage view. If no coverage is shown after test execution, check that 1) coverage was enabled and 2) you are displaying the type of coverage you configured C++test to calculate. The view’s toolbar indicates the coverage metric being displayed.

You can sort and search through the results using the available GUI controls.

Note that you need to double-click on a function to start off path coverage view.

There is a limit for the number of coverage elements (paths, blocks etc.) that can be computed by C++test. When the actual number of elements on a given level (function, file or a project) exceeds the limit, which is 2147483647, C++test will display "N/A" in the report for a given element. In such cases, the Coverage view will contain appropriate messages, e.g. [no paths], [no blocks].

Back Trace from Coverage Elements to Test Cases

Knowing which test cases are related to each coverage element can help you better assess how to extend test cases to improve coverage.

To see which test cases are related to a coverage element:

To analyze the coverage for individual test cases:

Coverage statistics and coverage highlights (in the code editor) will be computed/presented for the selected test cases only.

The buttons on the right of the toolbar allow you to collapse, delete, search for results, and synchronize with the current selection in the Test Case Explorer.

The drop-down menu provides commands that allow you to sort results by ascending/descending name or coverage, as well as to select the desired coverage type.

To optimize performance, the Coverage view starts in a uninitialized mode—displaying only project-level coverage summaries. This mode is indicated with grayed project icons:

Coverage in this mode may not be current—for instance, if the source code was modified outside of this IDE. You can update the coverage view by simply expanding a project node. Or, you can wait for the view to be automatically updated during execution.

To help understand how these coverage types are handled by C++test, be sure to read and understand the terms in the following table: 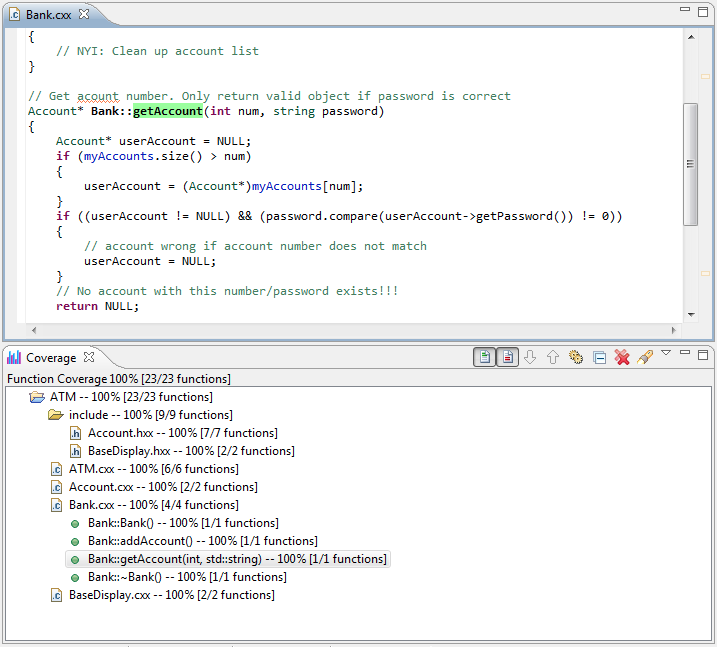 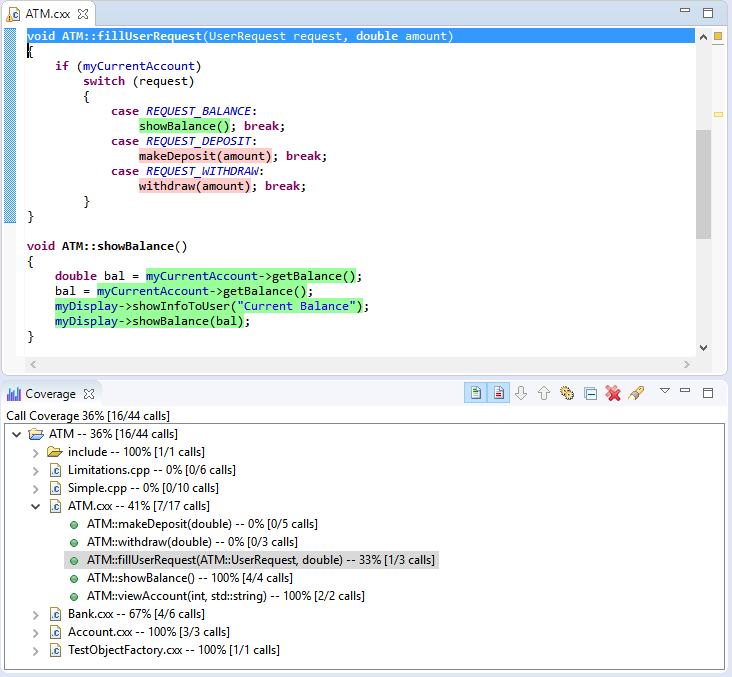 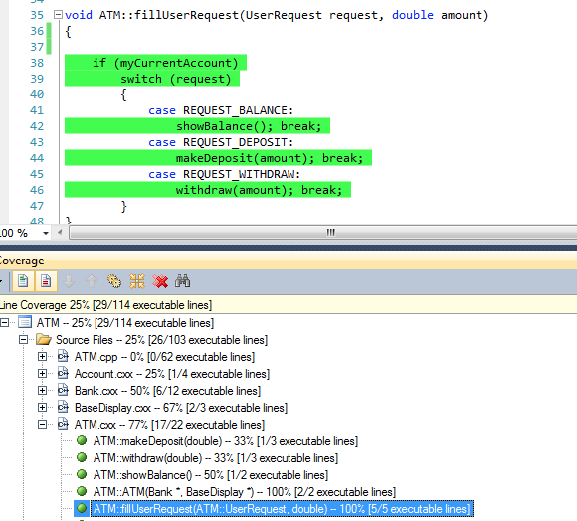 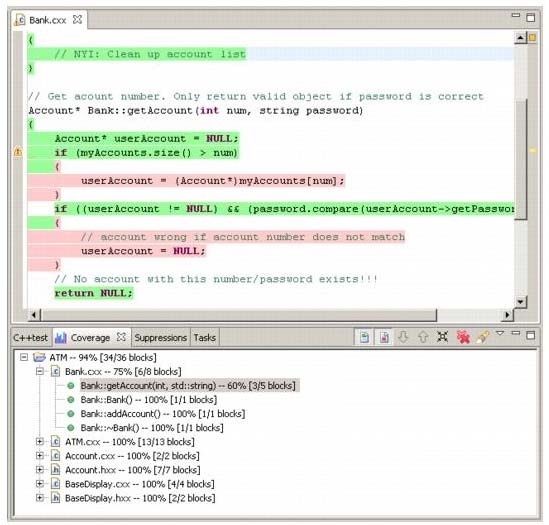 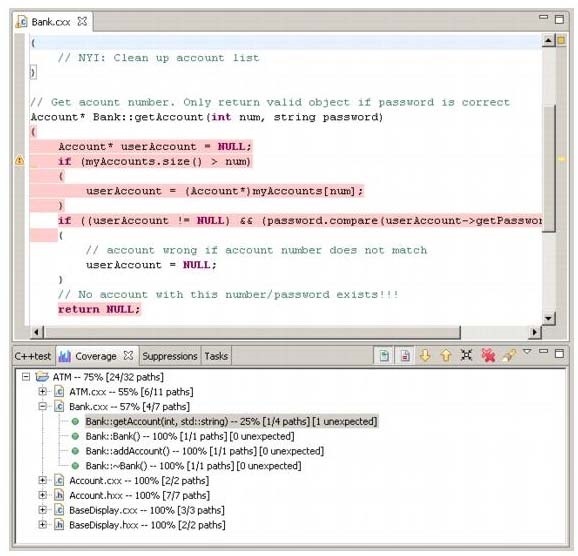 Indicates how many branches in source code control flow passed through. Complete, 100% coverage is obtained when every decision at all branching points took all possible outcomes at least once.

C++test considers the following statement types branching points in source code: if-else, for, while, do-while, and switch. C++test does not take into account such dynamic branching points as exception handlers (throw-catch statements). 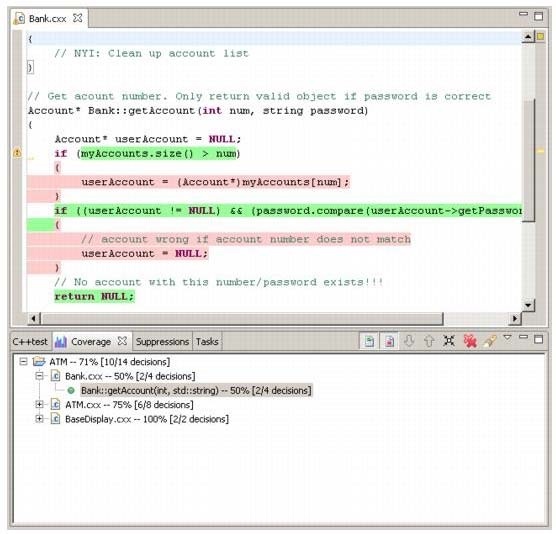 MC/DC conforms to the international technical standard DO-178B (RTCA), which specifies the software certification criteria for mission-critical equipment and systems within the aviation industry. This includes real time embedded systems.

According to the DO-178B standard, the following three conditions must be satisfied to obtain complete (100%) MC/DC coverage:

Since C++test considers that every condition and decision can have only two outcomes for MC/DC coverage (true or false), it checks only for the third option (c) listed immediately above—since point (c) implies conditions (a) and (b). A condition is shown to independently affect the outcome of a decision by varying only that particular condition while holding fixed all other possible conditions. To test one given condition, C++test looks for test cases where:

Thus, to calculate the MC/DC ratio, C++test uses the formula

where m is the number of boolean conditions proven to independently affect a decision's outcome, and n is the total number of conditions in a decision. 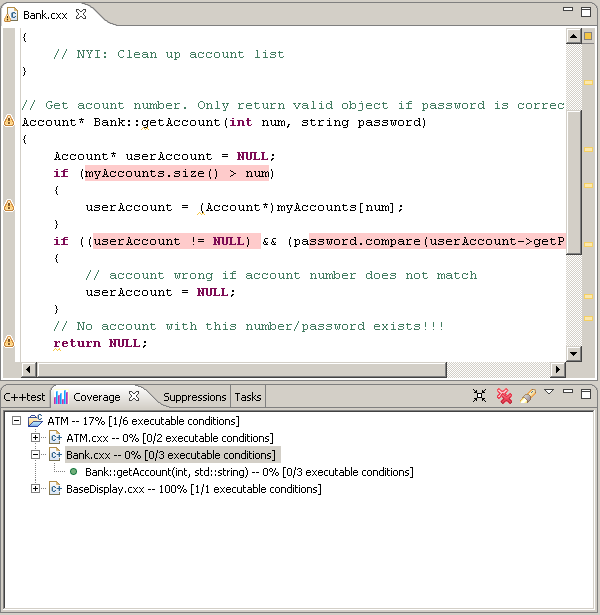 Now, let's assume that the following test cases were executed:

To compute MC/DC, C++test looks for the pairs of test cases where 1) the given decision was evaluated to a different value and 2) the value of only one condition changes (all other conditions remain unchanged).

In our example, there is one pair where independently changing the value of a affects the value of the complete decision:

This means that our test cases proved that a and b independently affect the value of the complete decision. In terms of MC/DC coverage, they are covered and the c condition is not covered.

Indicates the coverage for the outcomes of all decisions’ conditions. The overall number of outcomes for a decision equals 2 * n, where n is the number of conditions in a decision. Therefore, to obtain 100% coverage, all conditions must take all possible outcomes. However, to obtain non-zero coverage, one condition only needs to take one outcome.