The following compiler/environment versions are supported:

Placing IAR memory attributes in front of pointer declarations is not fully supported. In the following example, Declaration A and similarly written declarations will be analyzed as if they were written like Declaration B:

This limitation affects projects with the following configuration:

The following declarations are handled correctly and may be used instead of unsupported construction mentioned above: 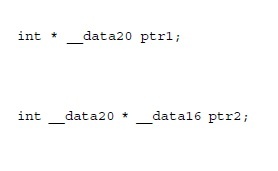 Why User Libraries May Be Removed During Linking

C++test uses an option-filtering mechanism to substitute instrumented objects for original user objects in linking command lines. In formats like ELF and COFF, the object and library file extentions differ by default (.o/.a, .obj/.lib), which C++test depends on to properly emply the option-filtering mechanism. UBROF libraries and object files, however, have the same extension (.r??) by default, which results in C++test removing libraries from linking command-lines. This was solved for system libraries by introducing an option-filtering pattern based on their observed systematized naming convention (dl430*.r43). User libraries, however, are still removed.

Preventing Libraries From Being Removed During Linking

There are two solutions to this problem:

If you choose option #2, insert the following option-filtering rule into the c/cpp.psrc files: