This topic explains how to customize a test suite’s properties (such as its name and how individual test cases are run). In this section:

To customize test suite properties, double-click its Test Case Explorer node and use the controls that open in the configuration panel (on the right side of the GUI).

The Requirements and Notes tab of the test suite configuration panel allows you to associate requirements, defects, tasks, feature requests, and comments with a particular test in the test suite.

The HTML report will indicate the artifacts that are associated with each referenced test. For example, here is a report that references a test with an associated comment:

The requirements you define will appear in Structure reports (and also in Report Center for Parasoft Concerto users), allowing managers and reviewers to determine whether the specified test requirements were accomplished. For more information on Structure Reports, see Creating a Report of the Test Suite Structure.

To configure associated artifacts for tracking:

Configurable execution options allow you to control factors, such as whether:

These options are configured in the Execution Options tab, which has three sub-tabs: Test Execution, Test Flow Logic, and Regression Options.

You can customize the following options in the Test Execution sub-tab of the Execution Options:

SOAtest allows you to create tests that are dependent on the success or failure of previous tests, setup tests, or tear-down tests. This helps you create an efficient workflow within the test suite. In addition, you can also influence test suite logic by creating while loops and if/else statements that depend on the value of a variable.

In many cases, you may want to have SOAtest repeatedly perform a certain action until a certain condition is met. Test suite flow logic allows you to configure this.

To help you automate testing for such scenarios, SOAtest allows you to choose between two main test flow types:

To configure test flow logic options that apply across the test suite:

For a step-by-step demonstration of how to apply while pass/fail test flow logic, see Looping Until a Test Succeeds or Fails - Using Test Flow Logic.

The following options are available for specific tests:

If any set-up or tear-down tests are available, they display in the left GUI panel and you will be able to configure test logic as follows:

This functionality allows you to stop a test (or run a test) if a setup test fails.

The Regression Options controls options allow you to customize how data sources are used in regression tests and which test suite have regression controls. Note that this tab is not applicable for web scenarios tests. Available options are:

If a new row is inserted into or deleted from the data source, all multiple regression controls associated with that data source must be updated.

The Variables tab allows you to configure variables that can be used to simplify test definition and create flexible, reusable test suites. After a variable is added, tests can parameterize against that variable.

You can set a variable to specific value, then use that variable throughout the current test suite to reference that value. This way, you don’t need to enter the same value multiple times—and if you want to modify the value, you only need to change it in one place.

As an alternative to manually setting a variable to a specific value, you can have a data bank tool (e.g., XML Data Bank) or Extension tool set the value of that variable "on-the-fly."

Variables are available as parameterized values within tool configuration panels (using the ${env_name} convention), as well as through scripting with com.parasoft.api.ExtensionToolContext.getValue(String) and setValue(String, String).  Values are of type string, integer, boolean.

Once added, variables can be:

Setting Variables and Logic Through Scripting

Very often, test suite logic and variables will depend on responses from the service itself. Using an Extension tool, you can set a variable in order to influence test flow execution. For example, if Test 1 returns a variable of x=3, then Test 2 will run.

Via the TestSuiteVariable API, you can access a variable and either set it to a value, or get a value from it.  Using this value, you can configure test flow logic.  See com.parasoft.api Interface TestSuiteVariable in the Extensibility API Javadocs for more information. The Javadocs can be accessed by choosing Parasoft> Help, then opening the Parasoft SOAtest Extensibility API book.

For example, you can enter the following into an Extension tool to set a variable:

To get a value from a TestSuiteVariable object x:

Where varValue will be returned as a string.

To configure SOAtest to show what variables are actually used at runtime, set Console preferences (Parasoft> Preferences> Parasoft> Console) to use normal or high verbosity levels.

After each test, the Console view (Show View> Parasoft> Console) will then display variables used at runtime. For example:

Viewing such variables is useful for diagnosing the cause of any issues that occur.

For a step-by-step demonstration of how to use variables, see Creating Reusable (Modular) Test Suites.

You can customize the following options in the SOAP Client Options tab of the test suite configuration panel:

The Browser Playback Options tab is divided into several sections:

The above options do not apply to tests run from the command line interface.

There are three main authentication options:

If you want the authentication apply to every request, leave the path and realm empty. 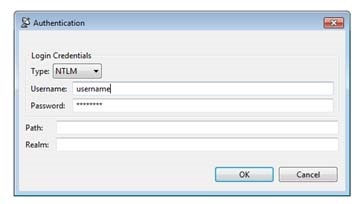 You can enter multiple authentication credentials for scenarios that access many servers which  authenticate in different ways. SOAtest will use the path and realm to determine when the authentication scheme should be applied to a request.